7/24/2022 -
History was made Saturday night when Amelia Eisenschenk took her No. 1 car to victory lane becoming the youngest sprint car feature event winner in tr
$0.00Cart (0) On a night full of action and drama, Nate Barger would get his first ever win behind the wheel of a sprint car. The victory in the Spielman Excavating IMCA Sprint Cars also marked the first win at I-90 Speedway for the Madison, South Dakota, driver. Cory Yeigh would take the checkered in the T&R Contracting Late Model Street Stocks. Camden Myers raced through the field to win in the Great Western Bank USRA B-Modifieds. Josh Bradley took home his third trophy of the season from I-90 Speedway in the LawnSnow.com USRA Hobby Stocks.

For Nate Barger, the early portion of the 20-lap main event pitted him against his brother Nick Barger who raced out to the lead at the drop of the green flag. On just the fifth lap, the Barger brothers started exchanging slide jobs and cross over moves as they had raced away from the rest of the field by more than a straight away.

"I sure wasn't going to let him beat me," quipped Nate Barger in victory lane when asked about the battle with Nick.

A caution on lap seven brought the field together, but it was Nate Barger with the perfectly timed slider in turn two on the restart that would put the Point Bar #98 out front for good. Behind the leader, Lee Goos Jr was charging through the field for a second place run ahead of Jesse Lindberg, Trefer Waller and Alec Mateya. For Mateya, it was his first top-five finish of his career.

Cory Yeigh took over control of the T&R Contracting Late Model Street Stock feature on lap eleven from his ninth starting spot. The driver of the Casco Storage Units #64 would go from there to his fourth I-90 win of the year and career win 31 at the speedway. Evan Miller was second ahead of Zach Olivier. Tim Dann crossed the line fourth after starting in position 14 - that effort earned him the Precision Drywall Hard Charger Award for the night. Matt Steuerwald completed the top five.

Camden Myers used a big slide job in the Great Western Bank USRA B-Modified feature to take over the front position on lap seven of the event. The tenth position starting driver would go from there to get his third win of the year. It also extends his points lead over his brother Tyler Myers who finished third in the event. Wade Wright placed in the second spot. Dustin Kruse and Logan Kafka completed the top-five finishers.

The drama of the night unfolded in the LawnSnow.com Hobby Stock feature event when the driver who took the checkered flag was hit with an excessive celebration penalty following the event. That would give Josh Bradley his third victory of the year in the division. The feature was red flagged early when Mike Pechous flipped down the front stretch. He was unharmed. 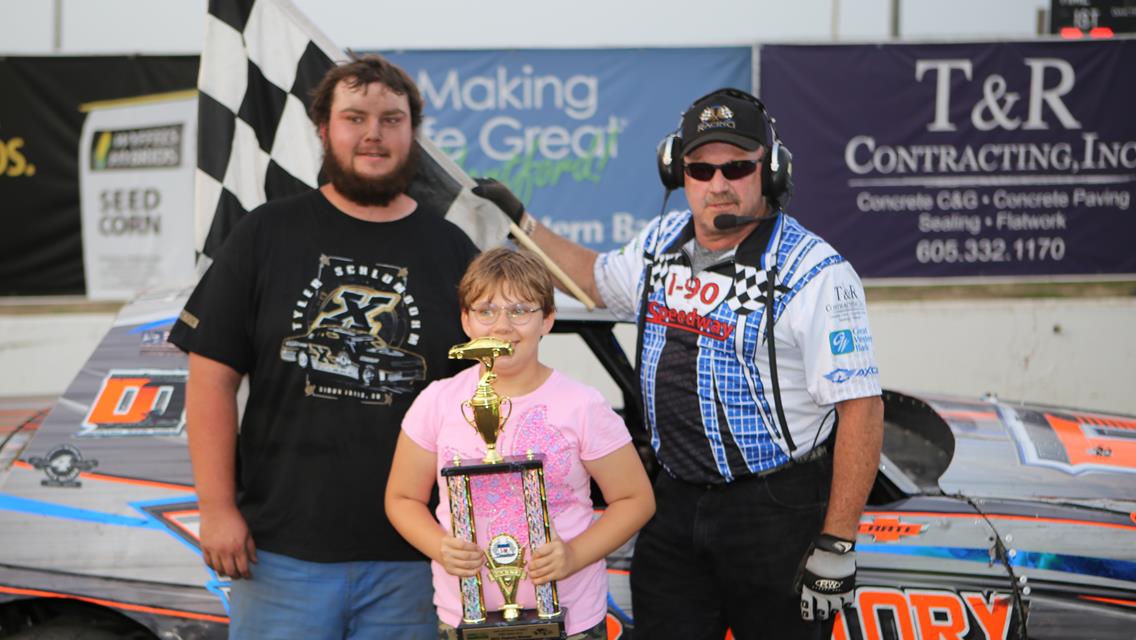